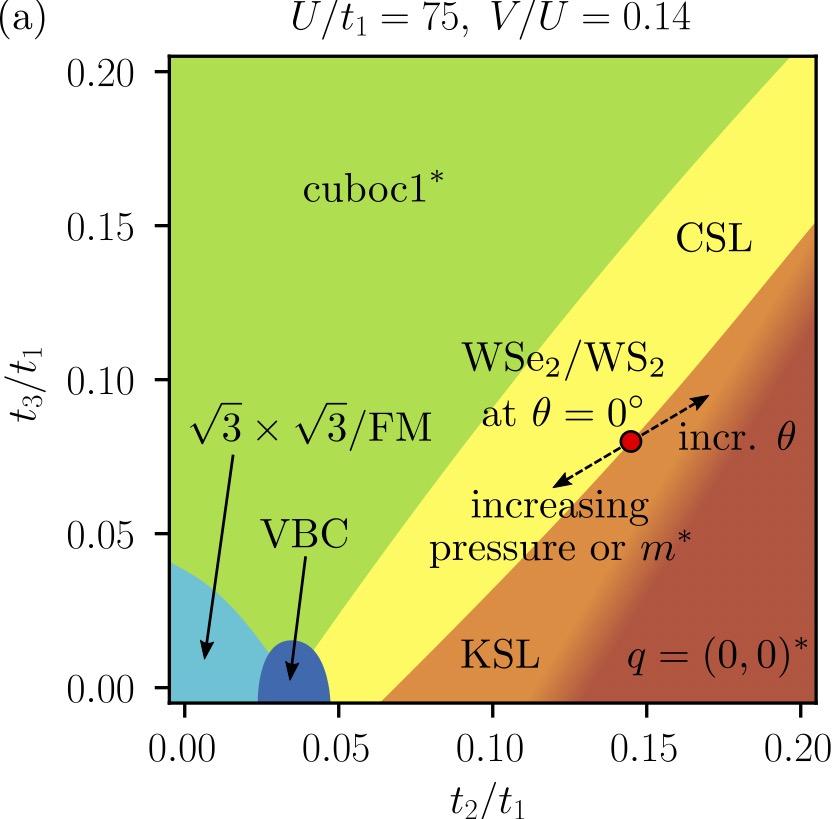 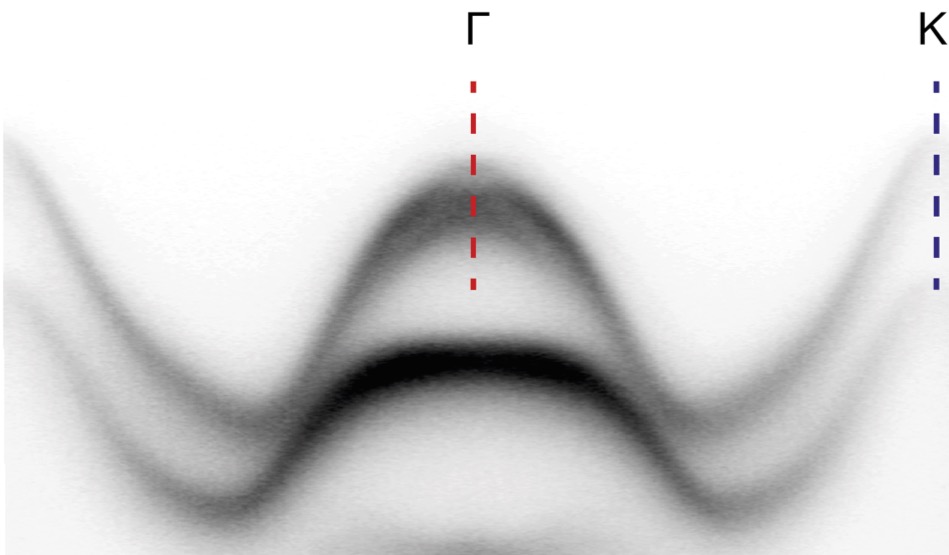 I provided the theory for a wonderful ARPES experiment that revealed the presence of flat bands in twisted bilayer WSe2. To our surprise, we only saw the flat bands around Γ and not at K — where they were to be expected based on all other (transport, exciton, STM) experiments. So some new mysteries to solve! Now available on the arXiv: 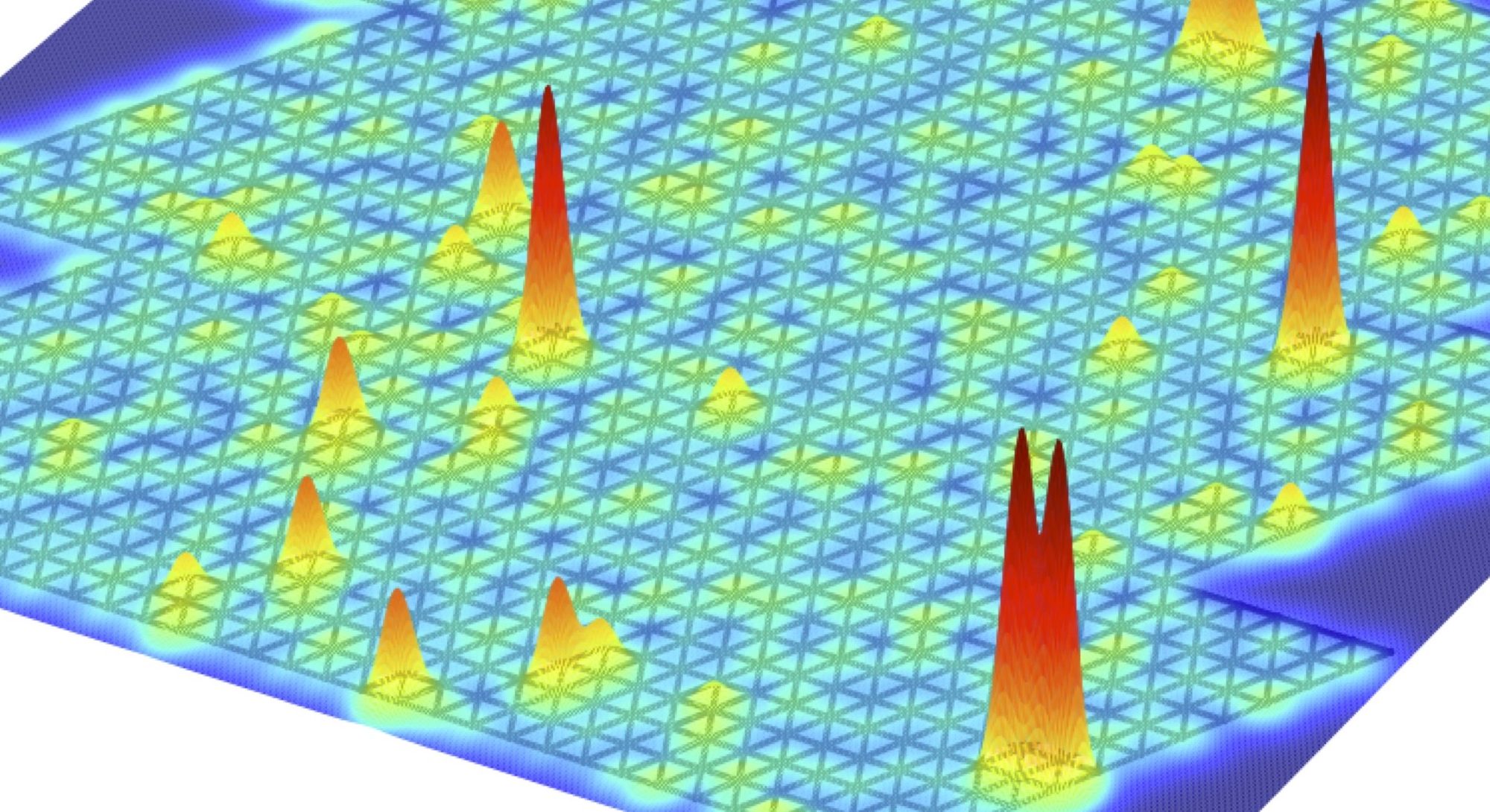 Authors: Yuting Tan, Pak Ki Henry Tsang, Vladimir Dobrosavljević, Louk Rademaker
Abstract: The moiré pattern induced by lattice mismatch in transition-metal dichalcogenide heterobilayers causes the formation of flat bands, where interactions dominate the kinetic energy. At fractional fillings of the flat valence band, the long-range electron interactions then induce Wigner-Mott crystals. In this Letter we investigate the nontrivial electronic phases appearing away from commensurate fillings. Here, competing phases arise that are either characterized as doped Wigner-Mott charge transfer insulators or alternatively, a novel state with frozen charge order yet is conducting: the ‘electron slush’. We propose that an extremely spatially inhomogeneous local density of states can serve as a key signature of the electron slush.
Reference: arXiv:2210.07926 (2022)

To my surprise I found out that the flat bands of TMD heterobilayers automatically have a spin-orbit coupling that makes them realizations of the Kane-Mele model. This is different from the original Wu-MacDonald model where they say its a triangular lattice Hubbard model. Now on the arXiv!

Spin-Orbit Coupling in Transition Metal Dichalcogenide Heterobilayer Flat Bands
Louk Rademaker, arXiv:2111.06208
Abstract: The valence flat bands in transition metal dichalcogenide (TMD) heterobilayers are shown to exhibit strong intralayer spin-orbit coupling. This is reflected in a simple tight-binding model with spin-dependent complex hoppings based on the continuum model. A perpendicular electric field causes interlayer hybridization, such that the effective model is equivalent to the Kane-Mele model of topological insulators. The proposed model can be used as a starting point to understand interactions and the experimentally observed topological phases.

I’m quite proud of my latest single-author paper, in which I explore a new direction in the field of disordered interacting systems. I dub it: “Few-Body Delocalization“, and I investigate the question: given that single-particle states are all localized in d ≤ 2 dimen- sions, how can many-particle states become delocalized?

In the end, using scaling theory and some numerics I show that there exists a delocalization transition for n-particle bound states in d dimensions when n + d ≥ 4. Read more on arXiv:2107.06364.

Last year we showed that you get ridiculously high superconducting temperatures if the electron-phonon coupling is strongly peaked around zero momentum transfer, so-called forward scattering. While the paper from that time is just accepted in the New Journal of Physics, we came up with a new paper discussing many of the more subtle details – for example about the vertex corrections, quasiparticle interference and gap structure. This week on the arXiv!

(PS: I’ve updated the publication list, a lot of things from last year are now peer-reviewed published somewhere, such as our MBL-paper in Physical Review Letters, or the topological classification in Phys. Rev. B!)

Abstract: Mono- and multilayer FeSe thin films grown on SrTiO3 and BiTiO3 substrates exhibit a greatly enhanced superconductivity over that found in bulk FeSe. A number of proposals have been advanced for the mechanism of this enhancement. One possibility is the introduction of a cross-interface electron- phonon (e-ph) interaction between the FeSe electrons and oxygen phonons in the substrates that is peaked in the forward scattering (small q) direction due to the two-dimensional nature of the interface system. Motivated by this, we explore the consequences of such an interaction on the superconducting state and electronic structure of a two-dimensional system using Migdal-Eliashberg theory. This interaction produces not only deviations from the expectations of conventional phonon-mediated pairing but also replica structures in the spectral function and density of states, as probed by angle-resolved photoemission spectroscopy, scanning tunneling microscopy/spectroscopy, and quasi-particle interference imaging. We also discuss the applicability of Migdal-Eliashberg theory for a situation where the e-ph interaction is peaked at small momentum transfer and in the FeSe/STO system. 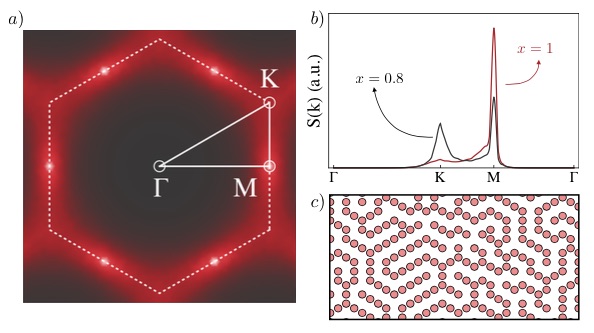 Abstract: We show that introducing long-range Coulomb interactions immediately lifts the massive ground state degeneracy induced by geometric frustration for electrons on quarter-filled triangular lattices in the classical limit. Important consequences include the stabilization of a stripe-ordered crystalline (global) ground state, but also the emergence of very many low-lying metastable states with amorphous “stripe-glass” spatial structures. Melting of the stripe order thus leads to a frustrated Coulomb liquid at intermediate temperatures, showing remarkably slow (viscous) dynamics, with very long relaxation times growing in Arrhenius fashion upon cooling, as typical of strong glass formers. On shorter time scales, the system falls out of equilibrium and displays the aging phenomena characteristic of supercooled liquids above the glass transition. Our results show remarkable similarity with the recent observations of charge-glass behavior in ultra-clean triangular organic materials of the θ-(BEDT-TTF)2 family.