Title: Gate-tunable imbalanced Kane-Mele model in encapsulated bilayer jacutingaite
Reference: Louk Rademaker and Marco Gibertini, Phys. Rev. Materials 5, 044201 (2021)
Abstract: We study free, capped, and encapsulated bilayer jacutingaite (Pt2HgSe3) from first principles. While the freestanding bilayer is a large-gap trivial insulator, we find that the encapsulated structure has a small trivial gap due to the competition between sublattice symmetry breaking and sublattice-dependent next-nearest-neighbor hopping. Upon the application of a small perpendicular electric field, the encapsulated bilayer undergoes a topological transition towards a quantum spin Hall insulator. We find that this topological transition can be qualitatively understood by modeling the two layers as uncoupled and can be described by an imbalanced Kane-Mele model that takes into account the sublattice imbalance and the corresponding inversion-symmetry breaking in each layer. Within this picture, bilayer jacutingaite undergoes a transition from a 0+0 state, where each layer is trivial, to a 0+1 state, where an unusual topological state relying on Rashba-like spin orbit coupling emerges in only one of the layers. 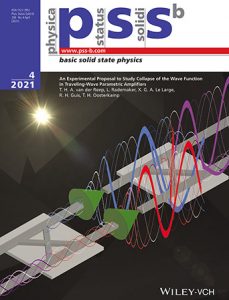 Our work on wavefunction collapse (An experimental proposal to study spontaneous collapse of the wave function using two travelling wave parametric amplifiers, see here on arXiv) has made it to the cover of the latest issue of Physica Status Solidi (b), with some nice cover art made by the first author Tom van der Reep.
See the full pss(b) issue here.

The Dutch newspaper NRC Handelsblad covered our recent work on a direct detection of flat bands in twisted bilayer graphene!

Just published in Physical Review Letters, our latest work on a quantum spin glass with unusual dynamics. Spin glasses and many-body localization (MBL) are prime examples of ergodicity breaking, yet their physical origin is quite different: the former phase arises due to rugged classical energy landscape, while the latter is a quantum-interference effect. Here, we study quantum dynamics of an isolated 1D spin glass under application of a transverse field. At high energy densities, the system is ergodic, relaxing via a resonance avalanche mechanism, that is also responsible for the destruction of MBL in nonglassy systems with power-law interactions. At low energy densities, the interaction-induced fields obtain a power-law soft gap, making the resonance avalanche mechanism inefficient. This leads to the persistence of the spin-glass order, as demonstrated by resonance analysis and by numerical studies. A small fraction of resonant spins forms a thermalizing system with long-range entanglement, making this regime distinct from the conventional MBL. The model considered can be realized in systems of trapped ions, opening the door to investigating slow quantum dynamics induced by glassiness.

The readout of a microwave qubit state occurs using an amplification chain that enlarges the quantum state to a signal detectable with a classical measurement apparatus. However, at what point in this process is the quantum state really “measured”? To investigate whether the “measurement” takes place in the amplification chain, in which a parametric amplifier is often chosen as the first amplifier, we proposed to construct a microwave interferometer that has such an amplifier added to each of its arms. Feeding the interferometer with single photons, the interference visibility depends on the gain of the amplifiers and whether a measurement collapse has taken place during the amplification process.

My first paper with experimental groups is now published in Nature Physics. Our work is a detailed characterization of twisted bilayer graphene, with as highlight the direct observation of flat bands using nano-ARPES. I calculated the expected ARPES spectra, which can be seen in Fig 3 and 4 of the paper.

The full paper is here: Observation of flat bands in twisted bilayer graphene

Also, you can read more about it on the website of the DQMP in Geneva.

Together with the Yu Saito and Andrea Young (UC Santa Barbara) we wrote a paper about symmetry broken states in the presence of large magnetic fields in twisted bilayer graphene.

Read here more about it, on the arXiv.

At the University of Geneva a group of enthusiastic graduate students have instigated a seminar series devoted to ‘relevant techniques in many-body physics’: the “ToolBoX“. I had the honor of providing the first set of lectures on density functional theory, for which I prepared some notes with exercises.. Download it here below!

For the lazy students, you can download all the pseudopotentials and input files here.